Samsung Galaxy A51 Price and Specs in Nigeria 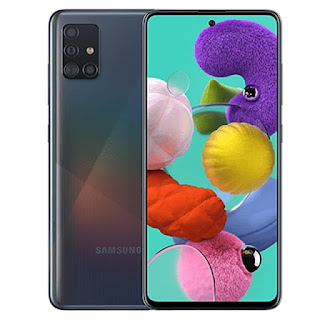 Where to buy Samsung Galaxy A51

It is the successor of the Galaxy A50 and the Galaxy A50S. One of the best features on the device is the perforated screen like the Galaxy Note 10. It also includes some exciting features like a bigger battery, a quad camera, and plenty of RAM.

Galaxy A51 Design and display

In terms of body design, the Samsung Galaxy A51 has a beautiful and smooth panel wrapped in premium plastic. It offers a mirror back with a diamond-cut design that is home to an L-shaped quad-camera configuration.
It measures 158.5 x 73.6 x 7.9 mm in dimensions and weight 172 grams. The device is available in an attractive color version. The front is made of glass and offers a 6.5-inch Infinity-O S-AMOLED display.
It supports an aspect ratio of 20: 9 and a Full HD + resolution of 1080 x 2400 pixels. The display is built-in with a fingerprint reader on the screen. In addition, the phone comes with facial recognition.

As for the camera, the Samsung Galaxy A51 comes with a quad-camera system consisting of a 48-megapixel main lens with f / 2.0 aperture, a 5-megapixel depth sensor with f / 2.2 aperture, a 5-megapixel macro lens with f aperture / 2.4 and finally an ultra-wide-angle lens of 12 megapixels with an aperture of f / 2.2.
When it comes to selfies and video calling, you get an impressive front camera with an f / 2.2 aperture 32-megapixel lens. The main camera has Smart Switch, Live Focus, and Super Steady Video.

The Samsung Galaxy A51 is powered by Exynos 9611 chipset with an octa-core processor that clocks at a speed of 2.3 GHz. It comes with multiple RAM with 4 GB, 6 GB, and 8 GB RAM, while the built-in storage is 64 GB and 128 GB.
The micro SD card slot on the device allows you to expand the onboard storage up to 1 TB. The device runs on the latest Android 10 based on One UI 2.0 out of the box.

A51 Battery and network

The Samsung Galaxy A51 is powered by a 4000mAh non-removable battery that supports 15W fast charging. It also supports Dolby Atmos.
The dual SIM on the smartphone supports 4G LTE Network and other fixed devices such as Wi-Fi 802.11 a / b / g / n / ac, dual-band, Wi-Fi Direct, a hotspot for wireless internet connection, Bluetooth, FM radio for entertainment, A-GPS for navigation and 2.0, Type-C 1.0 reversible connector for file transfer and charging.

Samsung Galaxy A51 Price And Availability

Key specs and features of the Samsung Galaxy A51

How To Enable Samsung A31 Edge Lighting Not Working?

Realme X3 Price, Specs, and Review – Doest It Worth The Price?