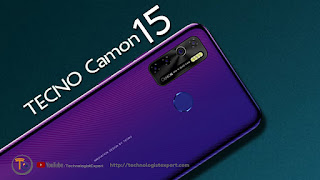 The Tecno Camon 15 enhances its predecessors, offering a much nicer chassis, better cameras, bigger battery, and more. In this article, we explore the specifications and price of Tecno Camon 15, which will help you make your purchase decision.

The Tecno Camon 15 falls into the same category. It has a chassis design that looks a lot like the Vivo IQOO 3 5G and Vivo Z6 5G. You have the same beautiful chassis that houses the hardware of the Tecno smartphone.

At the rear, there are a series of quad cameras, a camera flash, a capacitive fingerprint sensor, and the Tecno brand, which indicates that it is a Tecno smartphone.

In the beginning, there is a 6.55-inch IPS LCD display, with a drilling camera. This screen has a screen resolution of 720 x 1600 pixels and a screen density of 268 PPI.

The Tecno Camon 15 has three color variants; you have the option to select Shoal Gold, Fascinating Purple, or Jade.

Tecno Camon 15 presents the most powerful camera set ever presented on any smartphone in the Tecno Camon series. The camera configuration here is an improvement over what we had on Tecno Camon 12.

This quad-camera setup on the rear houses a 48MP, 5MP, 2MP main camera, and another 2MP main camera. The functions of each of these cameras were not known at the time of writing.

This camera configuration allows you to take photos in HDR and Panorama, in addition to recording videos in 1080p with the frame at 30fps.

For selfies, Tecno Camon 15 uses a single 16MP camera configuration. This camera is also capable of recording videos in 1080p at 30fpps.

Despite not presenting the exact specification sheet for Tecno Camon 12 from last year, Tecno Camon 15 does not deviate too far from the norm.

In fact, there are no surprises here. In terms of hardware, the Tecno Camon 15 falls into the same category as other Tecno Camon phones in the past.

Inside this smartphone, there is a MediaTek Helio P35 processor from Octa-core, 4 GB of RAM, 64 GB of internal storage, and a 5000 mAh battery, which is the largest battery of any Tecno Camon smartphone.

On the software side, Tecno Camon 15 runs the HiOS 6.0 interface on top of the Android 10 operating system.

Internet connectivity on the Tecno Camon 15 is limited to 4G LTE. 5G is not supported here.

The Tecno Camon 15 was announced on February 21, 2020, and is currently available for purchase.

How To Set Alarm On Tecno C9 Quickly

Realme X3 Price, Specs, and Review – Doest It Worth The Price?